I’m typing this just inside the balcony dining area of the Hotel du Lac on beautiful Lago di Como, in the village of Varenna (yes, there is also a Hotel du Lac in Bellagio), just as the sun is setting through the blue-grey clouds and settling behind the mountains that surround this most enchanting lake.

My small but mighty group of travelers arrived in Milano yesterday morning after an all-day flight. We loaded ourselves and our luggage on the mandatory bus that takes travelers to the Milano train station from Malpensa Airport. I’ve always wondered why an airport near this cosmopolitan city doesn’t have a short train or metro between the airport and the train, but the answer has always been, “It just doesn’t . . . “. So we buzz through the suburbs of Milan and arrive in the traffic, choked with auto fumes, arriving at the Stazione. Since there is construction near the entrance, we drag our suitcases around the large dark-blue wooden panels which close off the unfinished work from the pedestrians, and finally we reach the entrance to the station.

I spend the next hour securing my 5-day train pass, replacing one I received a month ago (don’t ask . . . long story). My travelers have passes, and they join me at the front of the queue to get theirs validated, we move on a slanted ramp to the third level where the tracks are marked and the walkways are a-buzz with travelers. Boarding the train for Varenna, we settle in for the 50 minute ride to our little village at Lake Como.

When we arrive there, two taxis await the disembarking groups, and they scurry back and forth from hotel to train platform, loading and re-loading passengers and depositing each set of three visitors to their proper hotel, turning around again for the next group. We, fortunately, are second in line, and we arrive at the Hotel du

Lac. Our rooms aren’t quite ready yet, but we are just in time for a light lunch out on the balcony overlooking the lake. Don’t you just love the combination of lake and mountains?

Bruschetta and insalate caprese are brought to our table, with tomatoes more colorful than I’ve seen in years (except in Italy, of course). Why can’t we grow tomatoes like this in the United States? I remember them in my garden when I was growing up, but they are now faded remnants of those good old days, and I’m always grateful when I arrive in Italy and order my first caprese. I sprinkle those red chopped gifts with salt and close my eyes as I take my first bite.

Okay, enough of the swooning about tomatoes. When our rooms were declared ready for our arrival, we took the tiny elevator, taking turns, to our respective room levels and began the initial ritual of unpacking what we would need for the next three days.

Rebecca, my roommate, didn’t sleep on the flight over, so she fell on the bed for a much needed nap. Erin decided she didn’t want to screw up her internal clock anymore than necessary, so she opted to try to stay awake until evening, and I, having had a great six-hour nap on the plane, headed out to explore the cobblestone pathways along and above the lake, finally venturing up one of those infamous set of steep stairs that lead to the next levels of streets in this mountainous village.

Two stops to sit on stone stairs at the water’s edge, a bit of journal-writing, photo-taki 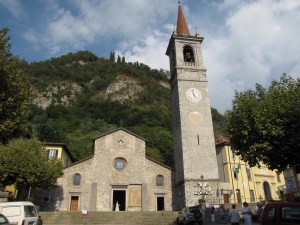 ng, more observations in my journal, and I climbed the stairs to the piazza, where the town’s church was brimming with the families and friends of a bride and groom! There always seems to be a wedding in the village church, no matter where we arrive, and the church bells rang, announcing 5:00 p.m.

After an hour or two of exploring, I rewarded myself with one of the two gelato treats I will eat on this trip. I’m not really a fan of gelato (I know, HERESY!) but I do seem to feel the need to have one or two scoops during any trip. Today the shop I chose did not have my favorite, lamponi (raspberry), so I settled for fragola (strawberry), and did enjoy the cold creamy substance, atop a sugar cone. Maybe I kid myself about this dislike of gelato. Hmmm.

And . . . back to the room, where Rebecca was waking up from her second nap of the afternoon. Erin had left us a note that said she had lost the battle to stay awake, and she’d see us in the morning.

So Rebecca and I headed back out for the water walkway, found a nice little restaurant, Il Molo, as the skies opened for a 10-minute downpour before it cleared up enough to allow us to stay at a table outdoors while we had our pizza and risotto asparagi. A half-liter of the house red wine and we were set!

We returned from our casual dinner at 8:30, and I read for perhaps 10 minutes before I slipped into oblivion in a comfortable bed, the sound of waves my only lullabye.

Twelve hours later, I awoke to our second day on Lake Como.