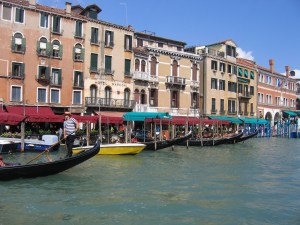 Actually two trains. We left Venice by vaporetto, our luggage in tow, after I helped Erin find the place to get her VAT Tax refund form stamped. We had plenty of time, and I will remember that leaving later than the morning train is a very good idea. The extra hour or two or three allowed us to avoid hurrying through the narrow streets, roller luggage in tow, and we could afford the time it took to stop at each dock, rather than make SURE we got the #2 or N vaporetti, which only stops intermittently.

I think (it’s been days, so everything melts into itself, of course) the Venice to Bologna train was the one that was 20 minutes late, and then came in quickly, ready to depart again. We practically ran to the far end of the track, looking for our first class coach, which is often farthest from the station, so when it arrives at the next large stop, the first class passengers (my travelers and I) won’t have to walk too far to the switching place. But we hurried and had to hoist very heavy bags (never again) up to the racks above the seats or stashed somewhere in the train car.

Venezia to Bologna, then another switch and Bologna to Ancona in LeMarche, where we picked up our car (I make it sound simple, but it never is in Italy), load the luggage, and head to our villa in Avenale, about 5 kilometres outside of Cingoli, an hour’s ride from the Ancona station. If you don’t make any wrong turns. In a strange place, even with maps, is that possible? Not typically. And generally it’s half the fun, though when it begins to get dark and my excellent navigators are still reading about “hairpin turns down rural roads”, we all begin to get nervous. But we arrived at Casa Frances at dusk, and were greeted by the smiling faces of Marcello and Rita, the parents of our Villa owners. Rita had prepared a delicious meal, fit for a dozen, though we were only three. And I apologized to both host/chefs and told them in my broken Italian that we would eat the rest of the TWENTY pieces of chicken for lunch tomorrow (and the next day and the next and the next). The antipasti (three kinds of meat, three kinds of cheese), the pasta con pomodoro, the twenty (really!) pieces of sautéed chicken pieces, and the cherry tart, along with appropriate wines . . . pro secco, vino bianco, vino rosso AND moscato for dessert, were so much more than plenty for us, and we graciously thanked Rita and Marcello before we tumbled off to bed.

I got some practice with my lingua Italia, talking with Rita, who reported to her daughter that my Italian was “very good”. I told her daughter that my Italy was only “very good” because Rita’s English was limited to “hello” and “eggs”. But it was such fun to dig back into the recesses of my memory and have a decent conversation, very basic, but decent, with Rita and Marcello. I’m back in my heart country, dead center, with no English in sight tonight, but for my companions.