@font-face { font-family: “Times New Roman”; }@font-face { font-family: “TimesNewRomanPSMT”; }p.MsoNormal, li.MsoNormal, div.MsoNormal { margin: 0in 0in 0.0001pt; font-size: 12pt; font-family: “Times New Roman”; }a:link, span.MsoHyperlink { color: blue; text-decoration: underline; }a:visited, span.MsoHyperlinkFollowed { color: purple; text-decoration: underline; }table.MsoNormalTable { font-size: 10pt; font-family: “Times New Roman”; }div.Section1 { page: Section1; Saturday, October 16, 2010. Today we pack up for one more Provencal destination, the lovely Rhone Valley village of Gigondas. But first, the drive over the mountain, which is quite spectacular and a diversion from the kind of terrain by which we’ve been surrounded. We began by loading our two cars at Fontaine du Faucon and heading toward Apt. All week, we’ve been “heading toward Apt”, and never quite get there because our real daily destinations are elsewhere, but this morning, we were able to actually drive into that small city, and found that but for the village center, it was just an ordinary town, with light industry on the outskirts and the usual lovely Provence architecture in the center.

Our first stop was perhaps 20 minutes past Apt, in the village of Sault, known as the

Lavender Capital of Provence. I’d surely love to be here in late July, when the lavender harvest is in full swing, because what we could see as we drove were fields and fields and fields (get the picture) of cut la

vender mounds. I can only imagine the gorgeous vistas of purple during the summer.

As is our group habit each time I visit this area, we park the cars just in the center of town, walk to one of the two very available bakeries, grab the sweets of our choice, and take them to the Tabac across the street, where we can sit with coffee and our goodies for a nice break. Today we met a delightful young French woman who grew up in this town and is at university in Marseilles, but was home for the weekend. H

er parents are lavender farmers, and they are preparing some housing for visitors which might be completed by next summer. Hmmmmm . . . 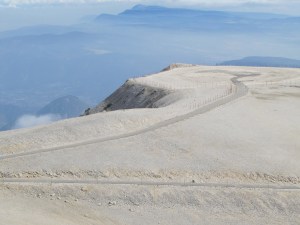 After wandering through the little shops, purchasing lavender sachets, lavender honey, etc., we are back on the road again, headed over Mont Ventoux. There are many bicyclists on this road toward the top of the Mont, which is always baffling, because the hill is so steep, the terrain becoming more and more ghostly, but there are hardy folk around here, apparently. Thus the Tour de France . . . On the way to the top, there is an eerie forest, and then Sommet Mont Ventoux, 1912 meters. One would think we’d arrived in Alaska or the Arctic Circle. But we are only one hour from the lush fall foliage in the Luberon Valley, Provence.

After a stop for a few photos, and a chance to watch the cheering cyclists as their buddies arrived at the summit, we got back into our cars and headed down the Mont. Another stop in Malecene for lunch and then on to Gigondas.

And to be accurate, we’re not really going to the village of Gigondas, we’re going THROUGH the village to our next eating-and-sleeping stop: Les Florets. See http://www.hotel-lesflorets.com 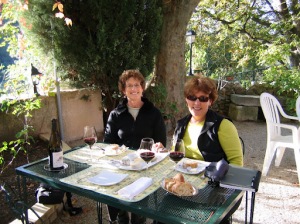 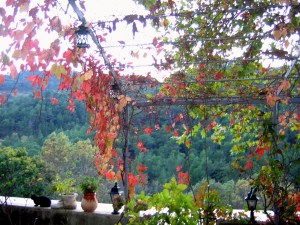 ominique, are always so welcoming, and their inn is enhanced by a beautiful stone area (it’s too large to just be called a patio), with tables, a dry well (cats and kittens are often found there, playing together in the sun), and a most magnificent view of the valley below. Thierry’s family grows grapes, makes delicious Rhone wines, and we choose one or two of them to accompany our exquisite dinners. You read the superlatives in this post, but it is because Les Florets and its charms are hard to describe without those words . . . delicious, beautiful, exquisite, magnificent . . . (and yes, I’m using photos from 2008, because our arrival this year was not accompanied by sunshine. It was a bit cloudy and darker than last time, but you get the picture!)

We began the “routine”, if you can call anything in Provence routine . . . we parked the cars, checked into our rooms, took a breath, and headed to the dining room for what we knew would be another mouth-watering meal. Only one wrinkle for me . . . a tiny detail . . . the TGV trains were on strike, so our planned car rental return the next day to Avignon and what we had hoped would be a long and leisurely train ride through the countryside to Paris was now disrupted by the strike, and though one in three or one in four trains were still running, ours was not, with no alternative times that made sense. So that little wrinkle cost me four hours of phone conversations and exploration of alternate plans with Travel Guard throughout the night.

Sunday, October 17, 2010. Our final “best plan” was to keep our cars, drive to Orly airport on the south edge of Paris, and have our ATS Paris shuttle driver pick us up there, rather than at Gare de Lyon. A much more nerve-wracking proposition, but better than sitting at the Avignon train station all day hoping to get out. As it stood, the drive was relatively uneventful for both cars, though of course as soon as we were off the A road, we lost the signs to Orly and wandered through two towns past our destination. But after all of that, we arrived at our Hotel Muguet only three hours later than originally planned.

I have never been more grateful for Travel Guard insurance than I was during that weekend. Leslie at the Concierge Services for TG called me over and over, checking to see that we were doing well on the roads, making sure we got to our hotel, and offering all manner of other help as we determined how best to get out of Provence. Thanks, Leslie!