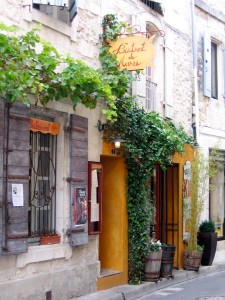 France Women 2010
Provence and Paris
October 8-24, 2010
Imagine yourself strolling through streets in villages in the Luberon Valley of Provence. Goult, Gordes, Lourmarin. Imagine sipping a lovely wine from the region, crumbs of a fresh croissant on the tip of your tongue.

Imagine the smell of lavender, herbes de Provence, the baked goods waiting in the shop on the corner. Antiques at the market in Isle de sur La Sorgue. Visits to de Sade’s castle, to an abbey nestled in the isolated hills. Cafes and shops abound.

A week at the beautiful villa Fontaine du Faucon awaits you, with heated swimming pool, and garden benches facing the Provencal hills. Just outside of Goult, a small village, this location allows us to easily make day trips to Aix-en-Provence, St. Remy, area wineries, the red hills of Roussillon. The vineyards are in their fall splendor, grape vines the color of the wines they produce . . .

Delicious meals created with ingredients fresh from the village markets, prepared at area restaurants or by Chef Daniel at our own villa.

After our week at the villa, we will spend one night at Les Florets, a lovely little inn just outside the town of Gigondas, north one hour from Goult. Thierry will serve us wine his family makes on the property, cheeses to die for, and a dinner that will leave your palate watering for a week. On our way there, we will stop in Sault, the lavender capital of Provence, and though the lavender will have been cut by then, it is in the air . . . everywhere.

At the end of our time in Provence, we will board the TGV, the “fast train” to Paris, and spend the next week immersed in the beauty, excitement, tranquility (and food!) of one of the most stunning cities in Europe. With museum passes and metro passes, you are free to wander wherever you want, whenever you want, visiting some of the most famous paintin

gs in the world, or finding the tiniest galleries in back streets. Paper stores, button stores, bookstores, artwork sold on the Pont Neuf. Just sitting outside the Louvre transports you to a different world.

We will stay in a small hotel in the Rue Cler district, the 7th Arrondissement. From there, your feet or the metro or cab will take you anywhere you want to go. Our hotel is just a few blocks from the Eiffel Tower. Sometimes lit in red, sometimes blue, the tower is an especially spectacular vision at night, as we walk through the park from our hotel!

Our trip will include AIRFARE FROM DENVER, all lodging, train from Paris to Avignon and back, rental cars, gas and tolls, transfers to and from out Paris hotel, 6-day Paris museum pass, Paris metro pass, seven dinners, eight breakfasts, Paris Street-wise map, travel journals, and ME, your planner, guide, and all-around fire-extinguisher!

Cost for above (including airafare from Denver) is $5600.00**. A $500 non-refundable deposit holds your space. Discount of $250 for referring a friend not on my list (one discount only, for the referring traveler).

Saturday, May 22 – Tuesday May 25 – Manarola, Cinque Terre. We arrived in Cinque Terre in the late afternoon and Gabriele awaited us at his simply luxurious La Torretta “Charme and Relax” establishment. This is a boutique hotel/B & B, with the rooms built into the mountain, all with views of the Italian Riviera. Exquisite sights from one’s window are accented by all the delicate niceities of Gabriele’s efforts in each room.

Awake Spa shampoo, lotions, soap, sewing kits, tooth care packets, and much more are scattered all around each room. The tie on one’s terry cloth robe has a small daisy tucked into it. Each room is equipped with an iPod docking station, a mini-fridge with free contents, a Nepresso espresso machine, and all the lovely touches you don’t expect, and usually don’t get from hotels. This place gets better every year.

After getting settled in our respective rooms, we agreed to meet at the tunnel to the train station, the opening to the Via dell’Amore, the Way of Love. Strolling through this easiest Cinque Terre “hike” takes us to the southeastern most village in the Cinque Terre, Riomaggiore, where we had a less than wonderful meal at a restaurant near the edge of town. But we know this was just an exception to the general rule that has offered us delicious food for many years. We bought our passes for the Park, train, and hiking trails, and returned to La Torretta for some sleep.

The next morning, Sunday, after being served a wicker breakfast tray in our respective rooms, we again met at the tunnel to the train station, boarded the little milk train that runs between these five villages, and disembarked at the “top” town, Monterosso al Mare. Jan and Cyndy headed for the old town and then on to their hike, while Paula was longing for the beach, which was right in front of us!

We rented beach chairs and umbrellas (thank you, Paula) and enjoyed the glorious sunshine for a few hours, reading and people-watching. We returned to Manarola and prepared to eat dinner at Billy’s, a delightful restaurant layered on the face of the Cinque Terre hills. Freshly caught fish, delicious desserts, and the most magnificent views as the light faded over the Italian Riviera.

Monday, we headed down to the train station again, this time for a longer ride. A train change in Sestre Levante, and our almost final destination in Santa Margherita, where we hailed a taxi to take us to Portofino, the Italian Riviera town for the rich and probably famous. Portofino resembles many of the other oceanside towns, except that the names on the shops are much more recognizable . . . Gucci, Hermes, and the like. Still, I avoid those high priced places and head for the piazza on the water, where yachts are anchored rather than fishing boats in the Cinque Terre villages.

I visited my favorite artist’s gallery, that of Lorenzo Cascio, and his daughter greeted me with the two-cheeked kiss as always. Neil and I have three pieces of her father’s artwork, and I’m always so pleased that she remembers me when I show up every two years.

The day was another magnificent one, blue skies reflected in the sparkles of the water, and we took a boat back to Santa Margherita, boarded the train and headed for Manarola for our last fresh-fish dinner, this time at Marina Piccolo, right on the edge of the sea.

Tomorrow we leave the sea and head for a tiny lake near the Swiss border . . . Lago d’Orta.