Well, are any of you wondering about the camel photo at the top of this website?  Yes, that was a photo I took this week, the week in which we felt like we were in the Twilight Zone on Mars (the red planet, yes?).  More about that in my next post.

Our first and last nights in the Outback were spent at Toddy’s Backpacker Lodge in Alice Springs, separate rooms the first night, sharing a room the rest of our time in the Outback, cooking in the hostel kitchens of our various lodging locations.  Good training for the Camino next year . . . and excellent relief for our wallets, with outrageous restaurant costs all through Australia.  This is NOT what we remembered from eight years ago on Oz’s east coast.  But we weren’t on the east coast yet.  We were in the middle of the desert, surrounded by heat and red dust.

We awoke on Day Two, excited to head for King’s Canyon.  Since I’m the 4WD driver in most situations, I took the wheel.  Remember, our driving time in Oz was focused and on the lookout to make sure the driver, sitting in the passenger seat, turned left onto the left side of the road, and turned right onto the . . . left side of the road.  We also got to laugh at whoever was in the “driver’s seat” every time he or she used the windshield wiper rather than the turn signal, also situated on the wrong side of the steering wheel.  It was a twisted brain exercise each day, re-learning to turn ourselves backwards and inside out.  Anything to get to the reverse orientation.  And the passengers cheered and counted all the right and wrong actions of the driver as we made our way down the dirt road.

So . . . I drove.  We were to go by way of the Mereenie Loop Road to King’s Canyon, but needed a permit to drive on the Aboriginal property. My instructions were to drive to Hermannsburg to a gas station there, buy a permit, and be on my way with my three red-dirt companions.

Anxiously on the lookout for Hermannsburg, we saw it rolling up into our line of sight like a strange tumbleweed . . . in the middle of absolutely nowhere, there was the “gas station”.  Hmmm . . . dust, old cars, lots of Outback mutts gathering around and a battered building with a caged front door..  I got out of the car, and walked into the “store”, greeted by a goofy white guy, perhaps in his mid-twenties.  When I asked to buy a permit for the Mereenie Loop Road, the guy guffawed, stopped, put his hand to his mouth, guffawed again, and told me he was “real sorry” but they were out of permits.  Yep, he had just started working there a week ago, and he had run out of permits about three days into his new stint. (Chortle, chortle, sideways look, silly grin . . . )

“But hey, if they stop you”, he advised, “just tell them you WANTED to buy a permit, but we just (guffaw, guffaw) ran OUT!”

I’m not sure what he was smoking, but I would like to have tried some of it.

The heat is not at all my favorite thing, a fact to which those who know me even slightly can attest.  However, when I had set my sights on seeing the 2012 total solar eclipse from nearly the only land location from which it would be visible, I also knew that going to Australia for a few days or a week would be foolish.  Any destination that takes nearly twenty-four hours from portal to portal deserves at least three weeks or more.

So it was with relish that I planned our trip to Oz.  One week in Western Australia at Neil’s request because the Margaret River Valley is known for . . . what else?  Wine!  A week in the Outback, so I could visit Uluru, the sacred red rock of the Aboriginal people.  A third week at the Great Barrier Reef, scene of the total solar eclipse if we planned it right (and of course we did), and a five-day wrap-up in Sydney before heading back to Colorado.

From the air, we could see absolutely no sign of civilization.

Week Two began with a flight from Perth to Alice Springs, in the dead center of the Outback.  Once we had been whisked away from the e civilization that was Perth and its surrounds, I began to see the complete desolation that is the landscape of the middle of this continent.

I used my iPhone to shoot photos out the airplane window.  First completely abandoned red dirt, seen through a screen of puffy clouds. 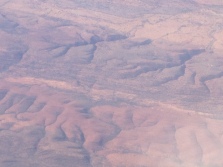 The “folded over” mountains from our plane.

Then the “folded over mountains” as Neil called them, a sort of long ridge with vertical creases, such as one would make in a long loaf of bread.

The long and zigzagged road . . . the only one visible from the air.

At one point, halfway through my flight, I spotted a thin red line zigging one way and then zagging another, perhaps the only road for a thousand miles.  Or perhaps not a road at all.  If that’s not it, there IS no “it” through this section of Oz.

Finally we arrived at the Alice Springs airport, and after about 45 minutes at the Hertz counter and numerous errors kindly and frantically corrected by the only employee in the booth, the four of us lugged our bags and backpacks to a Toyota Land Cruiser Prado, a honking big 4WD vehicle suitable for our Outback explorations during this next week.

Our Toyota “Camel” for travel during Week Two

This was the first rental car for which we were given a 100 km. daily limit for our travel.  We thought it a bit strange, but as they say in Australia, “No worries!”   After all, we wouldn’t drive more than 700 kilometres in a week, would we?

Wine tasting . . . that is what brings us to this little town, not a bustling one, despite its name.  But Busselton, nearly four hours south of Perth, “in the West”, as they say, is the gateway to the wineries of the Margaret River Valley.  It’s also a perfect spot from which to launch oneself onto the rocky coastline of the southwestern part of this continent.

One of the best parts for us is that we managed to snag a three-bedroom time share condo right on the Busselton beach . . . the only cost was the $150 Interval International exchange fee.  Now THAT speaks to some strange convergence of planets, grapes, sand, and our best intentions for our Eclipse 2012 trip.  More on that plan later. 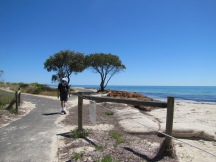 So launch ourselves we did, indeed.  Each morning we walked on the beach. Nearly each day we lined up three wineries to visit, interspersing our tasting with a picnic at the nearest set of coastal rocks, or a burger in Margaret River itself, or a paired food and wine tasting at one of the fancier wineries (Leeuwin Vineyards for that one).

Traveling with Ashley and Justin was a real lesson in meal efficiency, and we enjoyed most of our dinners at our condo, grilling steaks one night, stuffing ourselves with Justin’s tacos another, pasta on two different evenings, and always, always . . . some of the wine we had purchased after our daily tastings. 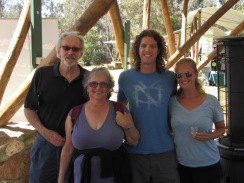 Wine tasting in Nannup at a food festival . . .

Not that we were only enologically focused . . . we did visit one brewery, where I, the non-beer drinker, began my soon-to-be-habit of ordering hard cider (YUM!).  We also set out one day to see only galleries . . . no wineries.  However, when we got to the Happ’s Pottery Gallery, we discovered that a tiny tasting room was tucked away across the entry from the artwork, and there we had some of the tastiest varieties of the week!

Happy campers are we . . . always a great beach with crashing waves against the surrounding rocks, always a beautiful sunset dipping below the blue waters, always a great glass of wine awaiting us, and always a decent bed to crash into when the day is done.